All Collections
Helio Weekly Broadcasts!
Broadcast No. 33 | When Your Team Won’t Budge on Budget

Broadcast No. 33 | When Your Team Won’t Budge on Budget

Written by Morgan McGowan
Updated over a week ago

Aha! We get it now, we understand why we make excuses about not having the budget to speak with our customers. It’s fascinating that the most valuable feedback you’ll ever get is so undervalued within the culture. Fear not friends! As we discussed last week, we create all sorts of excuses for resisting usability testing, the first of which is money. Our quick survey showed us that customer feedback is one of the most difficult areas to get budget for in most companies, mostly because it is undervalued. 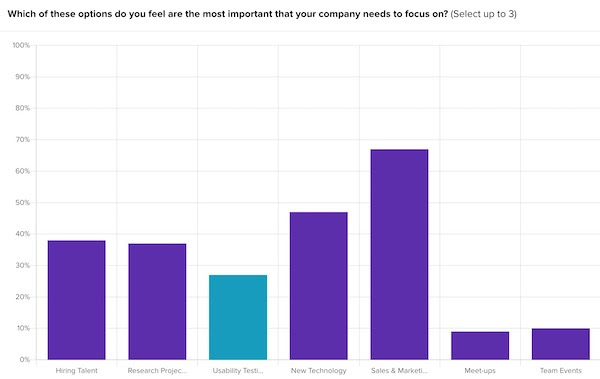 [Link to the Report]

We often hear “We don’t have a testing budget” from conversations with our own customers. What that really means is, “I can’t figure out how to sell the value of testing, so nobody gives me money...” Product teams and user feedback is still being pushed aside, and it’s not because the value isn’t seen by “higher ups”, it’s because marketing has focused more on selling a story.

Testing has an ROI. Yes, the value of testing can be communicated to your team. Conversations will get stuck in the work that needs to be delivered, and teams often lose sight of the outcome they’re striving towards. Testing and user feedback doesn’t just get you validation, it also helps build awareness of what you’re doing by broadcasting it early through subtle means. Product is the new marketing, which means testing is the newest channel to market through. To help you win these conversations internally, here are some tips for getting around the “budget” pushback.

You don’t have to be the CFO to make changes in how budget is allocated at your company. You only need to advocate for your team and the success of the company's goals!

Did this answer your question?